comments on a movie

(read only if you have seen the movie - a lot of spoilers...)

Just a movie to see - no expectations or such. At first nothing special, actually a bit messy with the unnatural intertwining of H to the terrorism-case by a file - clumsy, but suppose one has to try a bit too much... but then it got going with the special command center and the captured bombman.

Now before we get tangled in all this present moment jargon like islam and nuclear material and fbi and such I must make a point of something that got me intrigued and hooked: in this movie there are just two people who smile and smile so that their teeth show. There are only two people who have families - the same that smile. Of course I knew this just after watching this movie, but it did strike me so that I saw the movie again next day and then again, some five or six times all. And it became just more important, the smiles. 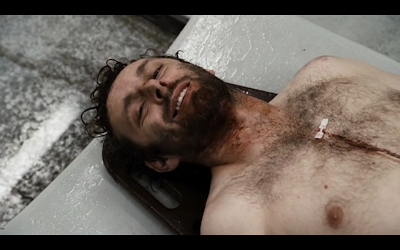 All the other people are just agents and administrators and soldiers, kind of professional bureaucratic lot with no life of any kind, no emotions or such... just as H says to agent Helen Brody (Carrie-Ann Moss): ' Harward law... antiterrorism, good choice.. no husband.. no children... they'll say you are lesbian.'  She is a carrier woman with precise words and set features. And she has a conscience.  Very serious, academic, 'no contact' person, who at the end has to decide how far it is possible to carry on the interrogation of one man when in scales with 10 million people and a  nuclear bomb. 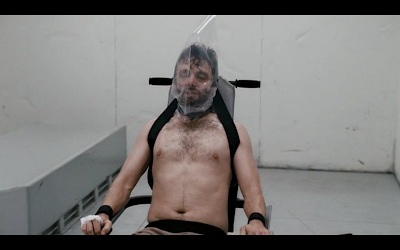 The central figure is H - the man who has to do the job. He is married with two children. Married to a bosnian woman, who was raped and her family killed and who did revenge by murdering her tormentors and their families. But under the circumstances the family is happy. H has been to army, a special unit and is now protected by government, the special interrogator. Nice father, gentle husband... played by Jackson. He is the torturer, but, as he says, he is just doing what anyone would do to find out the locations of three nuclear bombs Yusuf has hidden. And agent Helen is his measure: as long as Helen allows him to torture he goes on... until finally she denies him and he lets Yusuf go.  Yes, she is horrified all the time but sees the necessity to break one man to save millions until Yusuf's children are threatened. H needs her moral support: if you can do  it anyone could! H knows his position: he is a prisoner of a kind and has to do what is demanded. He gets to know the man Yusuf while cutting his fingers and giving him electric shocks. They get to know each other, Yusuf and H. Yes, and agent Helen, who is 'the good cop'. H and Yusuf, Yusuf and H - H knows that Yusuf controls the situation: he has planned everything, each step, each piece of knowledge, each move, and Yusuf keeps the control to the bitter end. The price is high, though: H cuts the throat of Yusuf's wife and she bleeds to death in his feet. Finally he surrenders the three bombs when H threatens to kill his children. Everyone is happy: they succeeded! accept H. He knows Yusuf all too well by now and understands that there is a fourth bomb too. Helen denies the further use of children and H frees Yusuf who grabs a gun and kills himself sealing his 'victory'.


To do the job, to do unthinkable things... to torture and break another man... Torture is forbidden by Geneva convention and other international agreements, but words are just words and can be circumnavigated by other words. Mental cruelty such as throat cutting in front of someone in order to shake him is also forbidden - but if the circumstances are so special, so severe... can it be allowed? As the last chance?  It is done says this film, and accepted, covered and buried. 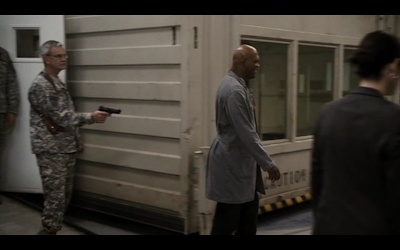 To do the job, to do the unthinkable!  When H starts the interrogation, his protector says: 'Now it starts, no-one knows what shall happen, not even he himself! And yes, it is a conversation between the torturer and the tortured, a road to the soul of the other by revealing his own, slow process that breaks a man or doesn't, as it happens in this case. Yusuf even enjoys their intimacy: he winks an eye and smiles broadly when H returns to torment him. Their dance macabre proceeds with him in lead...

The cinematography is placid. Pictures are steady and cool, the rhythm almost serene: no hasty cuts, quick elopements. Main colours are different greys  both in surroundings and clothes, and the places are scruffy, industrial spaces. Clothes are dark suits or military desert pattern - only H wears a faded blue workman's coat. So the visual look is nondescript and gives space to the people. H is big and black and has an expressive bald head with an expressive face - Samuel L Jackson is doing a good job! Yusuf is a bit like  mad einstein in his turmoil but the character holds together and is believable, even sympathetic. However, he is a bit soft physically for a delta force soldier and his teeth - after a few days in torture - are so white! Little things matter a lot... Tied to a chair or a bunk Martin Sheen has somewhat restricted possibilities but uses them well to express the emotions of this doomed man, doomed by himself.

We are very civilised people, or as Brody puts it, normal, and in comparison H is not normal, but violent and bad. But quite normal people are capable to horrible deeds, as referred by Rina, H's wife, to Bosnia, - or equally the nazis or Ruandas  citizens:  A crowd can behave like no limits in cruelty ever existed. Physical torture is an ancient method of extracting information, still used and perhaps not because of it's ineffectiveness. Yet it poses a problem to us, human and civilised  as we are, in these situation when time is the deciding factor...

Nice, clean and analytical one might say about this movie, and emotionally involving - if not emotional... well worth watching!!! 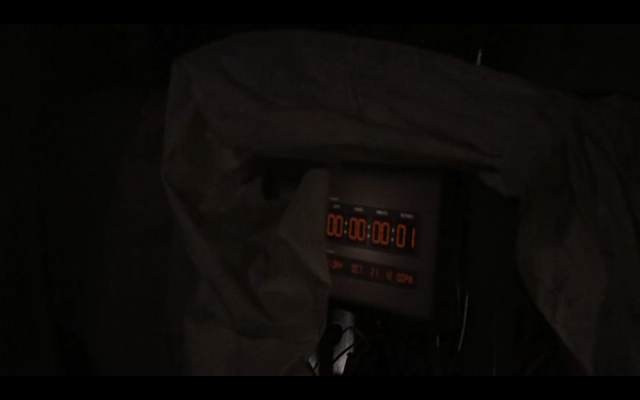